From victim to human rights defender

When Evrim Gul was still a child, her family arranged her marriage. She saw her husband for the first time when she became his wife. When the relationship turned abusive, she left him and found refuge at a women’s association, where she joined the Human Rights Education Program for Women. What she learned has empowered Evrim and many women like her to understand and defend their rights and build better lives for themselves.

Since 1995, over 15,000 women have participated in the Human Rights Education Program for Women in 60 cities across Turkey.

“I will never forget: I was eight months pregnant with my son. My husband kicked me hard in the stomach — I covered my belly to protect my baby. I told my mother and father, but they said it was my fault.” 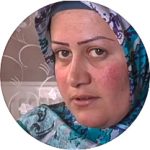 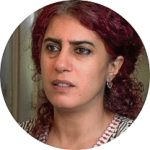 “Many women who attend our training program feel stronger and realize ‘I am not the problem. The problem lies elsewhere. It is in society, in this social construction.’ And so women feel empowered … If a woman wants to make a change and we can support her with training, she can change her life. She becomes more empowered in her communication with her husband and children.”

After being forced to marry a man 15 years older than her, Evrim left her family. Her husband was violent and abusive, beating her even while she was pregnant. In desperation, she turned to her parents for help, but they blamed her, saying it was her fault.

When the beatings continued, Evrim decided to get a divorce. But her family was opposed: “My family came after me with guns. They were looking for me.”

Evrim went to the Van Women’s Association (VAKAD), where she joined the Human Rights Education Program for Women, a program developed by Women for Women’s Human Rights (WWHR) – New Ways.

In the weekly workshops, Evrim learned about her rights, as well as the laws that protect these rights in Turkey. She understood that she had the right to be respected as an individual by her husband and family. Her communication skills improved, and through interaction with other women, she began to realize her own value and potential. She discovered that she could change her life for the better.

Ninety percent of the women who have completed this program, run by Women for Women’s Human Rights (WWHR) – New Ways, say that they better understand their rights, can use Turkish laws to protect their rights, and are more self-confident and assertive. Many go back to school, resolve marriage issues, or start working.

Evrim learned what she knew in her heart to be true: that she is equal to every other human being. She is transformed—no longer a victim but a human rights defender, eager and ready to stand up for her rights and those of others.

“I grew stronger I thought, I’m not alone if I fall, they will be there for me”.

On the 8th of March, 2012, Turkey adopted the ‘Law to Protect Family and Prevent Violence against Women.’ This law seeks to protect women, children and family members of victims of domestic violence, and provide services such as shelters, financial aid and psychological and legal guidance services, including programs on violence prevention. However, there is a lack of proper implementation, and violence against women remains very high.